Sometimes when the children make a mess, Mother Nature has to step in and clean it up.

The recent oil gusher in the gulf is a case where the children decided that it was safer for the environment to drill for oil way, way out at sea than, say, to drill in a desolate area of Alaska like Anwar, where there might be less damage to the environment. Evidently it makes more sense to go far out to sea, where the ocean is rough and currents are strong, and find a spot where it’s a mile down before you hit the ocean floor and drill there. Makes a lot of sense, doesn’t it? 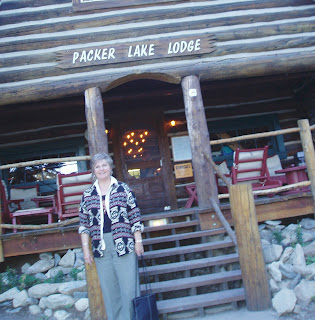 Eighteen years! Holy cow! That’s longer than some people have been alive. But compared to many of my friends, it’s not very long at all. Oh yes…I’m talking about Gayle’s and my anniversary. Of course, this was not the first marriage for either of us, but the rule is that past marriages don’t count in the total score, so I guess our kids won’t have to worry about a golden anniversary party for us. Actually, neither of us can believe we made it this long.


They say that married men live longer than single men. Maybe it just seems longer. But it would be interesting to examine the reasons men walk off the stage first and the role of marriage in the process. Could it be that our wives won’t let us die as long as there’s garbage to take out and a leaky faucet to fix? But despite their efforts, we men check out first.
My dad enjoyed his retirement villa, which was loaded with widows. Dad was Joe Cool and dapper at almost 90 years old; a true inspiration to my brother Tom and me. Tom says that if Dad spotted a woman he liked in the cafeteria, he would hit her metal chair with his cane. And he would hit it hard. When old ladies are startled they make a “hooting” sound. In one pass through the cafeteria Dad turned the place into what sounded like a horse barn full of owls with Tourette syndrome. He evidently had a lot of favorites. 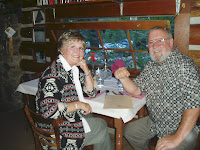 Gayle and I had a great dinner tonight at a rustic lodge located high in the mountains and on the bank of a beautiful lake. It was fantastic. Great environment. Excellent food. And an unbelievable view of the lake and surrounding mountains. There are several places like this hidden away in these hills. Most have cabins with reservations years in advance with unique lodges and good food.

It was a beautiful trip to and from, although I almost hit one deer, five squirrels and a partridge in a pear tree. Up here in the Sierras you worry more about animals than traffic, so I drive like an old guy.

Time to wind down and get back in training for another year. Gayle is yelling that I forgot to bring the garbage can back in. That should give me another week or two. I’m keeping two leaky faucets as back-ups. As long as something is broken, Gayle will keep feeding me. 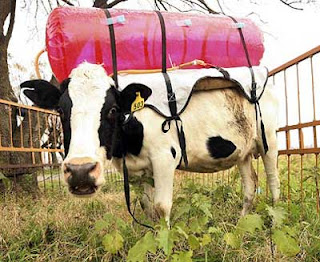 Since I write for the Green Business Chamber, which goes to chambers of commerce and businesses across the country, I find myself walking the fence between a conscientious and reasonable concern for the environment and the radical environmentalists with their global warming hysteria. I have to be careful not to offend the latter while holding to reasonable conservation practices. Sometimes it’s a delicate balance. I love nature and I have no tolerance for polluters, but I’m not ready to eliminate back yard barbeques yet.

I don’t believe that man has the ability to cause global climate change, nor do I believe that the blue people who hold their breath to cut down on carbon dioxide are saving the planet. I think the sun has a say in the whole thing and the carbon footprint of a volcanic eruption can quickly destroy all the environmental benefits of carpooling, riding bikes to work and turning off lights. I think some of these folks go overboard.

I’ve mentioned the celebrity who claimed she only uses one square of toilet paper. After that admission, sadly her social life went to pot. Then there was the scientist who hooked a large plastic container to his cow to measure bovine flatulence, i.e. “gas”. Unfortunately a cowhand lit a cigarette and blew up the cow, the scientist, ten chickens and a pig. And we have the morons who decided to burn corn for fuel, resulting in tremendous negative impacts on the environment, as well as causing Mexicans to turn from eating corn tortillas and beans to French bread and Brie.