Recently Gayle and I watched a documentary on the making of "Gone with the Wind."  Gayle is into old films, especially black and white movies. She likes the old "film  noir" stuff.

She looks at these films through an artist's eye.  She's interested in scene composition, the use of light, shadows, contrast, and other subtleties found in black and white films.  She  believes that color covers imperfections in films.  In addition, with the absence of graphic sex,  violence,  and profanity, the old films put the emphasis on plot, acting, dialogue, and artistic quality.  I'll admit, I'm beginning to enjoy the old films for the same reasons.

What goes on behind the scenes in movie-making always intrigues me, so I found the making of the classic 1939 film, "Gone with the Wind" by producer David O. Selznick very interesting.  (The "O" in his name was only added by Selznick to create a certain rhythm to his full name.)

More people in the world have seen "Gone with the Wind" than any other movie in history.  The year 1939 was called the "Golden Year" for films. "The Wizard of Oz," "Gone with the Wind,"  and John Wayne's first staring role in "Stage Coach" were just three of many classics that were born in 1939.
Since a former Los Gatos High School graduate played the role of Melanie Hamilton in "Gone with the Wind", my interest in the film increased significantly.   Olivia de Havilland had only been out of high school five years when she was chosen for her role in "Gone with the Wind."  She and her sister Joan Fontaine both attended Los Gatos High.  Both sisters had moved with their mother to Saratoga, California, after their British parents divorced in 1919.

Olivia de Havilland is now 100 years old and has lived in Paris, France, since the mid-fifties. Some interesting facts:  Her sister and she were both nominated for Oscars in the same year. She lost an Oscar to her sister in 1941, which caused problems in their relationship that were never resolved.

Olivia had a "thing" for Errol Flynn, which was reciprocated, but neither was aware of their mutual feelings. She had romances with James Stewart, Howard Hughes, and John Huston back in the thirties. Olivia also received the National Medal of Arts award from President Bush in 2008. 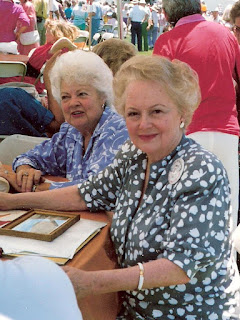 Gayle took the photo of Olivia at the Los Gatos centennial celebration, where she was the featured speaker.  She was 72 years old in the photo and still a pretty woman.

My memories of Olivia go back to when I was in the six or seventh grade.  I was actually in a play. I didn't volunteer. They needed a trumpet player and somehow I was conscripted and I'm sure I went kicking and screaming.  The play was "Macbeth",  directed by Olivia de Havilland and performed in the high school auditorium, if my memory is correct.

The fact that Olivia would direct a play for the Los Gatos community when she was at the peak of her fame, demonstrates her loyalty and attachment to her Alma Mater and the town of her youth.  I think she had taken a break from acting to raise her children during that particular time.  I can't find any record of that play and am writing what I remember.

Back to the Macbeth - I was asked to play a fanfare on my trumpet and announce the entrance of some king.  I had to be dressed for the period, so I had to wear leotards as part of the costume.   I looked like a court jester and was more concerned with my skinny legs than the play.  I was also in some of the group scenes, but always in the back. That was my one and only experience as a thespian.  Even the word scares me.

I had no idea who the Director was and thought her to be old, but very kind and encouraging.  She was in her mid-thirties, but to a pre-teen I guess that's old.  I only learned who Olivia de Havilland was when I was much older. This is one of many times I wish I could go back in time.

Occasionally while watching TV I'll say to Gayle, "Did I tell you that I was once 'directed' by Olivia de Havilland?"  Sometimes she'll patronize me and say something like, "Oh, really?  Did you get an Oscar for blowing a fanfare?"

I think she's heard so many of my stories from the past that while listening to me tell one she's heard, she'll just hold up the appropriate number of fingers for the times she's heard the story.  She says nothing.  She just holds up the fingers.  As the late comedian Rodney Dangerfield would say, "I don't get no respect."