The above words sound like a frustrated dog owner sending his Dalmatian out of the house. But we all know it’s a quote from “Macbeth,” Shakespeare’s shortest tragedy.

If you were lucky you may have met her at the 100 year celebration in Los Gatos or on some other occasion. But I had the honor of meeting this wonderful woman when I was attending Los Gatos University Avenue Elementary School. I think I was in the seventh grade. That was my big acting break. I was a star. Yeah…riiiight.

Miss de Havilland was directing a stage production of Macbeth at the high school auditorium and, because I played the trumpet, I was “conscripted” to dress in tight pants, the traditional dress of the period for my particular character, and play a fanfare on my trumpet to open the play.

I want to make it clear that the play was the only time in my life I ever wore those tights; you know…those Tinkerbelle things or Robin Hood pants or whatever they are…Honest! And I made sure that on my entrance I walked like John Wayne. It’s a little tough to picture John Wayne in tights as depicted by a 13 year old, but I tried my best.

I had to walk into the auditorium, along with a drummer from the school, and play some kind of a trumpet call and then announce the arrival of a particular king. That was it. That was all I did. They just needed a horn blower with skinny legs. I was also in a crowd scene on stage, mumbling inaudible words or raising my fist in protest or whatever the scene required. It was a memorable experience and it was actually fun, except for those funny pants.


At the time I didn’t realize what an honor it was to be associated with a production directed by Olivia de Havilland, even though all I did was make some noise on my trumpet. I didn’t even know who she was back then.


Now when my wife and I are watching a movie or movie previews and Olivia de Havilland is mentioned, I always say, very casually of course, “Did I ever tell you that I was directed by Olivia when I did Shakespeare…?”


It’s become a standing joke between us and now when her name comes up I don’t even have to make the announcement. My wife immediately says, “Yes. I know. I know. You were directed by Olivia de Havilland and you’re world famous. And you’ll probably get an academy award for wearing leotards when you were thirteen and blowing your stupid horn.”

It’s easy to train a wife. You just use repetition.
Posted by Ralph Higgins at 1:27 PM 2 comments:

"If you put the federal government in charge of the Sahara Desert , in five years there’d be a shortage of sand.”
-  Milton Friedman

The above quote by Milton Friedman should be plastered on every TV screen each time anything related to politics or government is discussed. California is bankrupt. I think Iceland was first country to go BK, but Greece, Spain and most of the countries in Western Europe are teetering.

The only socialist or communist nation that seems to be moving in a positive direction is China, but the reason for that is that they’ve incorporated a form of capitalism into their economic system. Yet our leaders want us to follow the example of the failed systems of Europe. They want us to line up for rationed health care, as per England, Canada, Sweden, etc. They want to spend more than we have.

Let’s say you had a vision of a one world government, a single currency and a universal set of laws. Obviously it wouldn’t work as long as there was a single super power with military and economic superiority, based on a philosophy of individual rights and freedom. The playing field would have to be leveled and freedoms removed, right?

So how is that done? How about Cap & Trade, transferring wealth from the U. S. to third world countries. How about the manipulation of currency and devaluing the dollar? How about turning a once strong country into a debtor nation? How about boosting labor costs to the point that industry is forced to leave the U. S. to survive, leaving service-related jobs to fill the vacuum with very limited production capacity? How about creating total dependency on government, the elimination of guns, control over the free market, etc.?

Anyway, boys and girls, our country is in trouble. In fact, I think we are witnessing the death rattles of western civilization. The hypothetical scenarios I read about in the 60’s have become reality. It’s been a long time coming, but the required economic catalyst is finally here and the slide has begun.

Sorry for being negative this morning, but the joy of Christmas seems to be in blaring juxtaposition to world events and it’s sometimes difficult to put things in a realistic perspective. But it can be done.

You can still have a good Christmas if you focus on what the celebration really represents. If you believe that the Deity made a visit to our planet in human form, these worldly problems pale in comparison to the magnitude and the ramifications of that singular event in human history. That’s the key.
Posted by Ralph Higgins at 11:50 AM 2 comments: 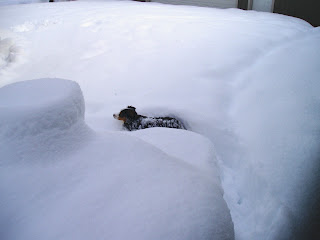 Global warming is killing us up here in the mountains. Since scientist say that bovine flatulence contributes to the problem, I wonder if our brilliant leaders will divert some of their financial aid to our foreign enemies to providing the cattle industry with beano for their cows or simply raise more taxes. I say let the cows pass gas. We need global warming in Quincy.
We’re freezing our butts off up here. I wish Al Gore and his minions would pray to their gods of earth, wind and fire, or whatever they worship, and see if they can divert some sunshine our way. (When I wrote for A&M Records I arranged the music of a group by that name)
We had roughly three feet of snow during Thanksgiving, which kept us from our planned Thanksgiving celebration with our kids and grandkids. We have another trip planned next week, but that too will be contingent on the weather. The black ice in the canyon is the real culprit here.
I see a lot of blue people up here in the mountains and I’m not sure if they’re blue because of the cold or because they buy this climate change B.S. and are holding their breath to avoid emitting carbon dioxide thus causing global warming. I suggest breathing and breathing heavily to turn up the heat.
My dog normally likes the snow, but not when it’s so deep he disappears and literally has to swim out of it. Let's play a game of, "Find the dog." 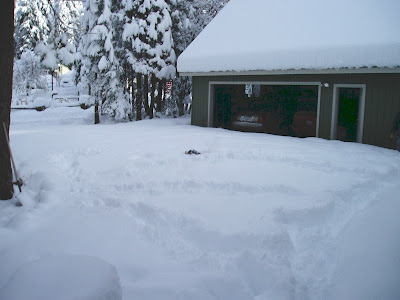