Thanks for Ava Sophia 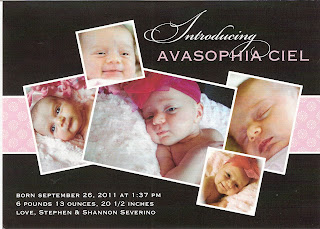 Thanksgiving Day is normally a time for gobbling the turk, floundering around in mash potatoes and gravy, sucking up cranberry relish and unbuckling your belt to make room for more.  It's also a day of football and falling asleep on the couch.
I remember Thanksgiving dinners when I was a kid.  It was second only to Christmas as a traditional time for the entire family to get together.  Many families have a crazy uncle who wouldn’t be at the table if not for being “blood,” but the closest we came to that is my wild cousin, Lyle.  My uncle was one of my heroes as a kid. An “almost” Olympic weightlifter, he generated my interest in lifting weights and gave me my first 22 rifle.
But cousin Lyle was a wild man. He was a biology teacher who was known for demonstrating that spiders were harmless by eating a large spider in front of his biology classes each year.  He was the inspiration for my first interactive music software program, co-authored with .  It was a national best seller and was titled, “The Spider Eater.”  I won't get into his exploits, but by today’s standards Lyle would be considered tame.  I remember him spiking the cider and conning my “non-drinking” mother into drinking it. She liked his concoction and I think she just pretended not to know what was in it. She was the greatest.
I remember the smell of the house, the warm fire in the family room and a huge turkey lying in obscene repose on the kitchen counter.  When the stuffing began I had the feeling that this was something I shouldn’t be watching.  It was time to leave the kitchen and it was more comfortable to go out in the crisp, cold November air and throw the football with my cousins and my brother.  After all, this is also a big day for football games.
When I was in high school, we played Campbell High on Thanksgiving Day.  This was the big game of the year. This was the day the rivals clashed and every player knew that, win or lose, a feast awaited him after the game.  In fact, I think that thought came to me almost as often as remembering whether I was to carry the ball off right tackle or block a linebacker.  Late in the fourth quarter the ball carrier began to look like a golden brown turkey.  That made him an easy target. We tried to knock the stuffing out of him.
Gayle and I will be having curry turkey on Thanksgiving Day with our Indian friends, but we’ll be spending time with our kids after Thanksgiving when things are less hectic. Being far from them makes it difficult.
Despite all that bad stuff going on in our country and the world, we still have a lot to be thankful for.  My daughter Shannon’s success at bring Ava Sophia into the world, after years of problems, comes to mind.  I guess if you didn’t have the “bad,” you wouldn’t appreciate the “good.” Ava Sophia Ciel Severino (4 names) is a miracle baby. Check out the photos of her above.  This is my first granddaughter. I have two wonderful grandsons, and Gayle has a good balance of two and two.  So Shannon's baby would be the first of many things I can think of to be thankful for on Thanksgiving day. Maybe every day should be Thanksgiving Day.
Posted by Ralph Higgins at 7:23 PM 4 comments:

Sorry. This stall is Occupied.

I know it’s past time for a blog, so I’ll come up with something quick.
It’s difficult for me to get past the insanity of the “Occupy” idiots, because that’s all we’ve heard about for weeks. No one with a brain can suggest that there is a comparison of this adolescent rebellion to the Tea Party. The Occupy dingbats are naive college students, union supporters, homeless druggies, and other societal dregs.
That’s evidenced by the drug use, rapes, murders, destruction of property, disease, open sex, and all the rest of the childish behavior. Defecating on police cars or in front of a crowd is not typical of civilized and intelligent adults. Most of these “flea baggers” have no idea why they are “occupying”, except to have fun, get stoned, get laid or break something.
Read more »
Posted by Ralph Higgins at 3:07 PM 5 comments: