"Come on Baby, Light My Fire"

I’m not sure if I was a bad kid, if I was just mischievous or if I became demented prematurely, but I was just thinking of what it was like to be raised in a large church with a bunch of buddies who were crazy.

If my dad had known what was going on behind the scenes I wouldn’t have lived to experience the true and indisputable insanity of puberty. My dad was a quiet and spiritual man with an Irish temper and the physical prowess to back it up. I loved and respected my father as I did my “Italian” mother, who was both protector and consigliere for her two sons. There were times when she would go to bat for us even when we were guilty as sin. My parents were a good team. They understood the “good cop, bad cop” routine.

I have many, many friends to this day that I have known from when we were kids in the church. But church was more than fire and brimstone for some of us. We were the pre-teen dingbats who were allowed to sit together in the back row, as long as we didn’t start a fire or a fight.

Labels: when I was a kid

A Proclamation of Temporary Emancipation

The most obvious is that Gayle is gone for a week. She is taking care of her two grandsons while her daughter is on vacation. She combines her obligation with visits with her close friends in Discovery Bay, where we once had a home on the water and she is evidently having a good time. So what’s it like for me in a relatively empty house?

The Bible says that God created man in his image. Not to be outdone, man insists on creating God or his gods in man’s image. It’s been going on since primitive times, although looking at our culture, if you drop out technology you may wonder if we aren’t still “primitive.” After all, some people still worship trees and rocks.

“Anthropomorphism”, is not a new word for anyone, but it is interesting how it is applied in various cultures. Anthropomorphism involves attributing human characteristics to gods, animals, objects, etc. An entire book could be written on Greek and Roman gods and other polytheistic cultures and the images they worshipped, but even today most people have an image of God that includes many human characteristics.

Most mature folks today would reject the idea that God is an old guy with white hair and a long white beard, sitting on a cloud; his piercing eyes watching to see if you got up at night, snuck into the kitchen and ate the last piece of pizza. But we still apply human emotions and personality traits to God. It must be in our nature.

Carl Jung, the Swiss psychiatrist, might say it’s an archetype from our ancestral past or Freud might consider God as a “father image”. Whatever we think God is or isn’t doesn’t in any way alter who or what He is in reality, but that’s not what got me thinking about this anthropomorphic thing. It was my dog. 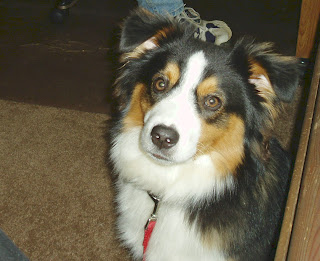