For those who think they would like to live in the beautiful, white stuff called “snow,” I have a house to rent you for a winter. 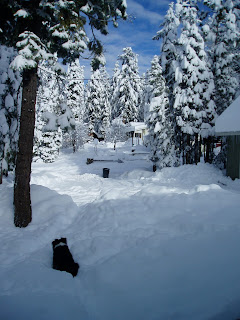 I’ve enclosed a photo of my dog trying to figure out why his toilet is covered in snow. Earlier in the day, he turned into a “gopher dog” and disappeared by tunneling under the snow. He’s got far too much energy to be stuck in the house all day, but, while he loves to lay out in the stuff, he’s a mess when he comes in and I have to give him a shower. The snow hangs on him in grotesque white balls and I’ve found the shower is the best solution.

As for Gayle and me, you can see what’s involved in getting out of the garage to get the mail, go to the store or go sight-seeing. Consequently we don’t get the mail. In fact, we can’t go anywhere.

Power outages come and go, the TV dish fills with snow, taking the garbage out requires a sled (I use the lid. It works like a sled) My computer has gone off and on so many times that it now has a nervous condition. I’m hoping it’s not Parkinson’s.

Gayle and I spent last evening reading books by candlelight. We had no electricity, consequently no heat, no TV, no computer, nothing but candles. 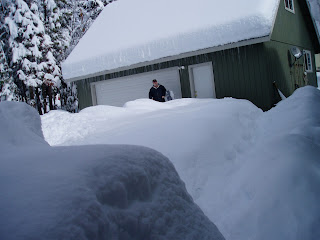 When we designed the house, I tried to avoid the 80# snow load requirement because of the addition cost, but the county wouldn’t okay it. Now I’m happy to have it. In fact, I’d be happier with a 100# roof.

Read more »
Posted by Ralph Higgins at 12:39 PM No comments: