A Note from Siberia

If cars cause global warming, I say, “Gentlemen. Start your engines.” 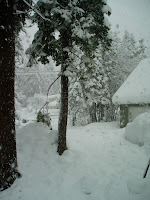 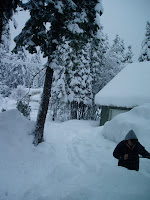 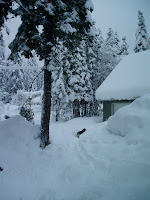 I get a lot of calls from friends wondering how things are here in , so I think I’ll include a few photos taken today and yesterday. The snow is expected to continue through the weekend, so I’m sure I’ll have even more snow to photograph later. Taking pictures of snow is easy. Even I can do it. It’s just a bunch of white stuff. It all looks the same.
I hired a snowplow to clean out my driveway so we could go to town for supplies and get the mail two days ago, but the next day we were buried again and even deeper in snow. The glorious day of the return of the snow plow was the only day in a couple of weeks that we’ve been able to get out of this *&^%$#@ house. This may be my last communication with the outside world. The snow is sneaking up to the door. I can feel it. 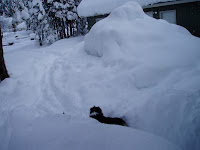 I expect that some day in the future, scientists will break through a huge glacier in Quincy, California, and find a well preserved wooly mammoth, some ancient Indian relics, primitive tools and a frozen well-preserved Cro-Magnon man holding a peanut butter sandwich in one hand and a dog named Dakota under his arm. He will appear to be staring through frozen eyes as though waiting for a snow plow that never came.
Posted by Ralph Higgins at 7:37 PM 2 comments:

So you want to write a book?

Oooops. I forgot that I have a blog. Man, I’m getting worse and worse on updating this thing.


It’s not that there aren’t things happening, but I’ve been buried in other writing projects. I’ve been writing and editing for a couple of internet companies and just completed a new book on growing up in the terrific decade of the ‘50s. The title is, “The Huckleberry Days of the ‘50s.” Subtitle, “Growing Up in Los Gatos.” The book is in production as I type this.

I’ve also re-written my novel, “Granite Veil” and cleaned out most of the heavy stuff, for example all the scientific analysis of the theory of evolution, which seemed to bog some people down. For those who enjoy that kind of thinking, it was very well received, but the new version moves faster with the focus on the murder mystery. The title of the new edition is, “Folsom Parallax.” I’ll remember to post a blog when it’s out.

I'll give you a quick lesson in publishing: