Merry Christmas from our home to yours 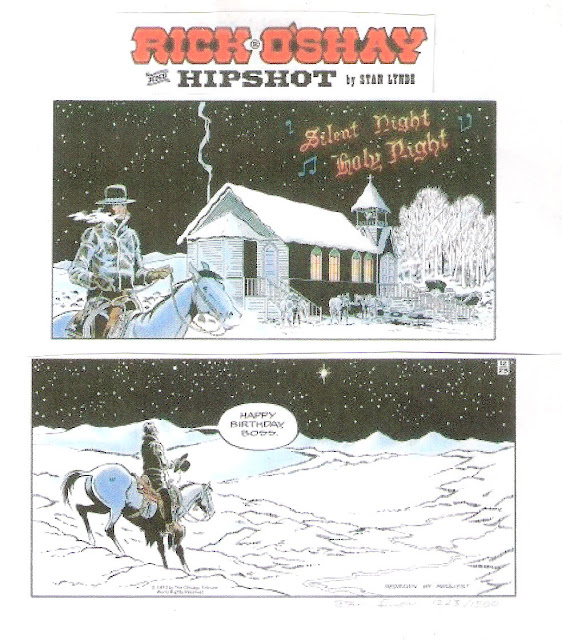 I would like to personally thank all of you who read my posts.  Gayle and I want to wish you all a wonderful Christmas!

Some of you may remember the old comic strip by Stan Lynde called “Rick O’Shay” and Rick’s buddy, the rough gunslinger, “Hipshot.”  The cowboy said very simply, "Happy Birthday, Boss." That was Christmas for old “Hipshot” in his church without walls.

Enjoy the Christmas season.  It’s a time for family and friends and a peaceful oasis for reflection, for love, and all the good stuff.  Fyodor Dostoevsky said, "Man only likes to count his troubles, but he does not count his joys.”

Christmas is a perfect time to count our blessings and joys.

Keystones and Other Stuff

As you may have noticed, I like to quote smarter people to support my thoughts.  It’s like a preacher hearing someone in the congregation shout “Amen!” But maybe I’m the one shouting “Amen” after reading their wisdom.

I want to pick a mix of quotes to stimulate our thinking on some current issues starting with the quote by the brilliant C. S. Lewis under “Quotes I Like” above.  What makes these quotes interesting is that they are statements from the past made by voices on both the left and the right.  Some of these may seem prescient, i.e. foreseeing the future, since they are eerily predictive of events today.

One quote that popped out at me was from Vladimir Lenin, because it’s so applicable to Obamacare.  Lenin said, “. . . medicine is the keystone of the arch of socialism.”

A keystone is the wedge-shaped stone at the apex of a masonry vault or arch, which is the final stone placed during construction and locks all the stones into position.  A masonry arch or vault cannot be self-supporting until the keystone is in place.

Passed quickly by Democrats without reading the massive health care legislation, we were told by Pelosi that it had to be passed to find out what was in it.  Evidently no one knew what was in the bill.  Like a Christmas present, it was a surprise.  Not a single Republican voted for this bill, but the Democrats voted for it in lock-step.

Socialized medicine has always been the goal of the left.  If medicine is the cornerstone of socialism, once the cornerstone is installed, the structure will be strong enough to withstand the weight of opposition.

In my opinion, the current chaos will be used to justify a single payer system, aka socialized medicine. Ostensibly presented in the interest of “fairness,” the government will bless us with a universal government health care plan based on the European model. The goal will be reached.   When that happens the keystone will be in place and the structure will be firmly established.

Our ignoble “leaders” didn’t bother to read, let alone understand the healthcare law before agreeing to it. This seems to be standard procedure for bills passed in the Legislature.  Ignorance of the law is no excuse for the rest of us, but not so for legislators.  They just don’t have time for the trivialities of reading their bills.

Back in 1920, H.L. Mencken, journalist and an outspoken Democrat, wrote this in the Baltimore Evening Sun:  “As democracy is perfected, the office of the President represents, more and more closely, the inner soul of the people.  On some great and glorious day, the plain folks of the land will reach their heart’s desire at last and the White House will be occupied by a downright fool and complete narcissistic moron.”

A narcissist yes, but is Obama a fool or a tool?

President Calvin Coolidge said, "It is difficult for men in high office to avoid the malady of self-delusion. They are always surrounded by worshipers. They are constantly, and for the most part sincerely, assured of their greatness. They live in an artificial atmosphere of adulation and exaltation which sooner or later impairs their judgment. They are in grave danger of becoming careless and arrogant."

Those are a few quotes that I’ve read recently, but here is one of my favorite quotes: “There is none so blind as those who will not see.”  may burn, but few smell the smoke or see the flames. This may be due to ignorance or it may be an act of will not to see.  Both are deleterious to freedom and democracy.

Did those who foisted Obamacare on us use ignorance to hide the fact that they didn’t care what was in the voluminous and onerous bill as long as it provided the setting for the cornerstone needed to catalyze their agenda?  Makes you wonder…

Thanksgiving is a great time of the year for spending time with family and friends.  I’ve never understood why turkey is only eaten on holidays, but I guess it’s just tradition.  For example, every Thanksgiving the President pardons a turkey as a gesture of goodwill or something.  In Obama’s case his pardon was a gesture of professional courtesy. 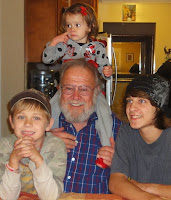 Gayle and I just returned from staying with my daughter Shannon in the house she and husband Steve just bought with an extra bedroom for us. Being centrally located, we were able to spend a lot of time with our family, the importance of which can’t be overstated.  Many of our trips to civilization are too quick and frantic, trying to see our expanding family and many friends, but this trip was an exception.

There’s always cultural shock when entering the Bay Area and dealing with the persistent symptoms of post traumatic stress disorder upon returning home.  But what struck me this time was the fact that everyone, especially the younger generation, is on a cell phone.  I mean everyone. Even my own flesh and blood. 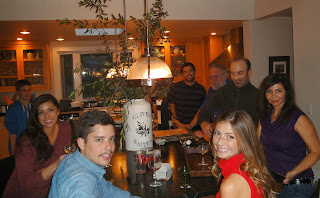 I would like to outlaw all cell phones.  We can’t get reception where we live, so that may color my reaction to hyperkinetic thumbs.  It’s a leap from smoke signals in to the magic hand-held devices used by yuppies and even baby yuppies. My 2 year old granddaughter joined everyone in the room staring at one of those things while I stared at a football game on TV.  I may become a missionary to spread the word that there is a big world outside of a demonic cell phone, iPad, smart phone, or whatever they are. 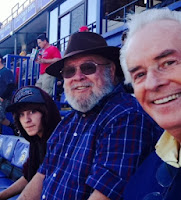 My buddy and I took my grandson, Gabriel, 13, to his first football game where , my alma mater, upset in a big game at Spartan Stadium.  I made a rule that Gabe could not use his cell phone during the game, which must have been like going through detox, but he’s a great kid and was soon yelling with the rest of the crowd. That’s when I decided to go to the mission field and drive out the demons in those hand-held devices.

Fisher-Price has a new product called the Apptivity Seat, a child's seat for newborns on up to toddlers with an iPad mount.  New research has found that more than half of gadget owners worldwide admit to suffering anxiety when they can’t use their smart phones and being without them was as stressful as a trip to the dentist or even their wedding day.  They call it “technology addiction.” There is treatment now for this addiction with a significant number of people hooked.  My solution is to take the addicts to a football game.

We’ve now returned to the land of smoke signals and Gayle is whistling along with Christmas music while changing the decorations from fall to Christmas.  She loves that stuff.

Since Gayle was born on Christmas day it took the first year of our marriage to convince her that all the pretty lights and celebrations weren’t for her birthday. I told her that there were no mangers in when she was born, camels are in the zoo, and if there were three wise guys hanging around with packages they were most likely Mafioso. She still runs outside Christmas Eve looking for the star.  Now there’s a real challenge for me.