You're Never Too Old

I’m not a health nut nor am I a gym rat, but I do believe in exercise and its beneficial results.  And the results aren’t purely physical.  I’ve always believed that exercise can change a negative mood into, if not a positive mood, at least a “less” negative mood. When you feel good physically, it’s reflected in feeling good mentally.
When I was young, particularly during my college years, I got into weightlifting somewhat seriously.  Many of my friends were also into it back then. I worked out in an old-fashioned smelly gym with several close friends on a regular basis.  This was before gyms were popular or fancy. Since the gym was the only one in , I got to work out with professional wrestlers and pro football players. I continued to lift off and on through my younger years and came back to it later in life.
I have to say that I retained some of my former strength into my 60s when we lived here in .  I worked out with a real serious former heavy lifter, who by then was in his 70’s. He was well past his prime, but was still tough and strong.  He told me that when you hit 70 you lose your strength very rapidly. Now that I’m there, I see what he meant.  When I was working out with him I was in my 60s and I hadn’t yet started the big slide to “feeble city.”
Read more »
Posted by Ralph Higgins at 4:51 PM 28 comments:

The leaves are turning color and the air has a chill. It feels like fall, but what happened to summer?  I guess we had a few weeks of it this year, but the winters here in the mountains seem to get longer and longer.  The familiar smell of wood stoves burning in our small community is not unpleasant.  It adds to the atmosphere somehow and I still like to ride my Triumph and breathe the crisp air, flavored by wood stoves. It’s definitely Halloween weather.

Back in civilization, the cities are beginning to reap the results of an unhappy populous or maybe one segment of the population.  To compare the current protestors to the Tea Party folks is ludicrous.  There is no comparison.  Compare a flea bag with a tea bag. Most of these kids have no idea why they are involved, but it is a lot of fun and some even make it to the TV screen.  Now they find that many are being paid to show up.  In my humble opinion, this is just the start.

We are seeing an extension of “protestors” to “rioters’ in , but, of course, none of that can happen here. But I remember something about the Rodney King riots in L. A., so maybe it can happen here and I faintly remember when the lights went out in years ago.  Not a good thing.

During the depression, men lined up for soup and sold apples to buy food. There was a moral law built into those folks.  If today’s   inner cities lost electricity for ten hours, what would be left when the lights came back on?  It’s a different mentality now.  Most vestiges of morality, empathy, and individual responsibility have been effectively eroded as our culture devolved.
So sitting on my deck with a drink while my dog explores the forest behind us or riding my bike up a winding road leading to a lonely lake may not be a bad alternative to urban chaos, road rage and the stress of life in the fast lane. And in our little community, the natives would tolerate scummy protestors about as long as it takes to drop a shell in a 12 gauge shotgun.
Posted by Ralph Higgins at 12:10 AM 7 comments:

I’ve been taking heat for not posting a blog for a week or two, but I have a good excuse.  I’ve been in the Los Gatos/San Jose area spending time with my daughter Shannon and my new granddaughter Ava Sophia. 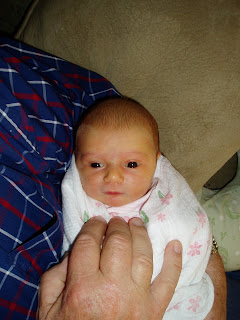 Some of you know the problems has had in her attempt at having a child, so it’s an exhilarating feeling to see a pretty little girl blinking her eyes at a world that is much different than the world her grandpa peeked out at over 70 years ago.
I was a coward or maybe I was clairvoyant at my birth, because I didn’t want to come out.  I was a breach, which means I came out ass-backward, which is basically how I’ve lived my life. I’d still be floating around in there if the doc hadn’t grabbed my leg and pulled me out, kicking and screaming. I think that behavioral pattern was set back then.
But little Ava seemed quite content at her introduction to the temperature change, gravity, and swooning spectators.  I have to qualify her beauty and contentment by honestly saying that when she cries, I swear she looks like Don Rickles.
It’s interesting how everyone tries to see who the baby looks like. A baby is like an ink blot test. People see what they want to see, but the only physical trait she and I seem to  have in common is a lack of hair. But I have to be honest…she’s a beautiful little girl.
My granddaughter was the main event, but I met with a lot of friends while in civilization and spent time with a former professional athlete, coach and close friend.  I’m working with him on his autobiography. It’s my first “ghost writing” project and it’s not as easy as I thought it would be. The challenge is to avoid writing in my “voice,” and not the “author’s” style of speaking. It’s a very interesting project with many professional athletes and famous people like the Pope and the President of the featured prominently. This man had an interesting life as an athlete, coach and businessman.
But the primary reason for my “blog” absence was that telephone call at 5:30 A.M. from my daughter. A call Gayle and I had been waiting for over the past couple of weeks, advising us of the impending arrival and the true blessing of a beautiful baby granddaughter. Along with Gayle’s four, we now have seven grandchildren. Holy cow! I’m older than dirt.
Congratulations Shannon and Stephen.
Posted by Ralph Higgins at 1:57 PM 6 comments: