Kin to the Wind 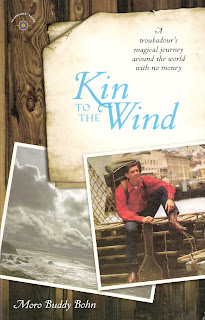 Many of us know Moro Buddy Bohn as Walter Bohn, musician and tennis player from the Los Gatos High School class of '57.  But how many of us are aware of his talent and his adventures?  Today, after traveling the world as an authentic troubadour, his musical talent can be experienced at www.moromusic.com online, and the book of his adventures, Kin to the Wind , can be purchased on Amazon.  I recommend both.

Frankly, I couldn't put the book down.  It's well written and moves from one exciting encounter to another; some so bizarre that you wonder how Bohn could have extricated himself from nefarious men and political subjugation.

The subtitle of his book is, "A troubadour's magical journey around the world with no money."  How many people would have the courage and confidence to grab a guitar and embark on world travel with no money and only the hope that somehow your talent alone could be traded for food and lodging?  We aren't talking about only nice civilized countries, but many place where you might be killed for your shoes.  And Bohn was only 21 years old.

Combining his youthful exuberance, curiosity, and enthusiasm, his dreams to travel the world using his guitar as his sole medium of exchange were realized beyond his wildest expectations. The fact of his inability to anticipate and foresee many of the challenges that lay ahead could have been cause for him to reconsider such a journey.  But he took the unknowns head-on and succeeded in using his guitar and personality to explore cultures that most of us will never experience.  You will see by reading that Buddy has an unusually strong faith in the goodness of people, a great capacity for love, and an optimism that seems to conquer the negative experiences he encountered.

He crossed the Arabian Desert with a camel caravan of champagne-smuggling Bedouins and performed with gypsies in Spain.  He played for Pablo Picasso in France and was a featured circus act in Italy.  His audiences also included Queen Elizabeth II of England, King Frederick IX of Denmark and the maharaja of Sandur.  He was the first to entertain U. S. troops in Vietnam, and he found himself court troubadour to King Bhumibol and Queen Sirikit of Siam.  During his subsequent professional years he’s played privately for Howard Hughes, a number of movie and recording stars, miscellaneous celebrities, and, as if that wasn't enough,  he fell in love with a princess.

But Buddy's travels were not all wine, women, and song.  He had numerous encounters with authorities and was encouraged by the communists in Berlin to defect; he was attacked and almost killed by Tunisians, and he met a ghost in the Himalayas.

Among the many interesting people he met in his travels, one stands out as a refreshing oasis in an otherwise rugged landscape.  It was in the Casbah of Algiers during the brutal seven-year civil war for independence.  Sonya was a legendary belly dancer who performed completely naked at the Fantasio, the most opulent nightclub in Africa.  Buddy's "magic" guitar facilitated a unique connection between the two.  They spent much time together and Buddy's guitar music was soon incorporated in her act.  He played and she danced until the end of her engagement in Algiers.

All good things must end.  Buddy describes their parting: ". . . we said goodbye as easily as a pair of windblown clouds in the sky that touched only for a moment."  The parting was not without pain, but the world continued to beckon. And so beckoned  another young lady named Zoe, who arrived later in Buddy's travels.

The book provides an interesting glimpse into parts of the world that most of us will never see.  The cultural idiosyncrasies add flavor to the variety of countries Buddy traveled during his two year stint as a pure and uncompromising troubadour.

I found the book very interesting, in part  because I've known the author since high school.  But it is well written and affectively projects Buddy's belief in the innate goodness of people, something he seems to bring out in those he met in his travels.  I should mention that his book is being considered as a possible movie.

Buddy just sent me an email indicating that his recordings, streams, downloads and CDs are available on his website  www.moromusic.com.  You can hear samples and order CDs as well as complete-album downloads.  Streams and downloads of individual tracks are now available from iTunes, Amazon, Spotify, Beats, Deezer and Google Play.  I don't know what some of those are, but there are evidently many options.

You can buy his book on Amazon (http://www.amazon.com/Kin-Wind-Troubadours-Magical-Journey/dp/1609520556)

It's a good read. You’ll enjoy it.

NOTE:   Most of you received a note regarding craigslist and the sale of a motorcycle.  I have no idea how that happened, but it was my mistake.
Posted by Ralph Higgins at 10:48 AM 2 comments: