The Birth of the Blues


My wife can’t stand to watch the news anymore, so she retreats to another room and watches old black and white films.  Actually, I join her when I think my head will explode over the actions of the morons running our country.  Generally these old films have a good plot, no profanity, only suggested sex, some violence but devoid of entrails exploding on the screen, and most don’t require special effects.

Film noir is a cinematic style of the ‘40s and ‘50s depicting the dichotomy between the dark and the beautiful.  Taken from the French meaning, “black film,” most of these films are easily recognized by the use of light and shadow and usually involve detectives, crime, and mystery.

As you know, I have an interest in the emergence of traditional American jazz in New Orleans.  If a director could eliminate the criminal aspects of film noir and capture the mood of those early musicians in the dark style of film noir, I would be hooked.  See if any scenes pop into your mind as you read this article.

The twentieth century was still new when jazz was born.  It was the dawn of a new day portending scientific advancements and a better life for Americans.  But the optimism of the new century would be tempered by a depression, wars, and social unrest.  Yet, hidden deep in the south the pulsating rhythms and groans of slavery began to articulate a new and unique musical language called jazz

As an art form, jazz is America’s unique contribution to the world. It is purely American.  It began and thrived in the south, nurtured by black musicians expressing emotions from blues to joy.  For example, funerals for musicians would begin with local musicians marching slowly in honor of the deceased playing a song like, “Just a Closer Walk with Thee,” soulfully and in a slow tempo on the way to the gravesite.

Upon reaching the gravesite, the music changed, expressing the joy that their deceased brother had reached the promise land. Fast, happy, exuberant jazz suddenly turned the event into a joyous celebration.  The music would change to something up tempo with a positive message like, “Didn’t He Ramble.”

Turn on the film noir and picture a smoke-filled brothel where black musicians join together and jam through the night - sometimes until the sun peeks through the dusty shutters covering smoke tarred windows.

Patrons are long gone or busy upstairs while musicians from other venues stop in to continue playing music strictly for themselves.  Generally musicians play for other musicians who “hear what they’re saying” and understand the language of music. The audience is secondary.

Finally exhausted, spent, but deeply satisfied from a musical catharsis that temporarily extinguishes the struggles of life, the musicians succeed in replacing the shadows of their dreary lives with the glow that only music can provide.  After the last note is played, they slowly put their instruments in their cases, step on the last cigarette butt, and reach for what’s left in the bottle.  One more for the road.  After a few pats on the back they shuffle out into the cold morning air. 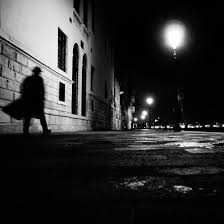 A low fog hangs over a dark and wet street reflecting the moonlight. Steam rises from a manhole cover as a tired trumpet player shuffles silently down Royal Street, past a gas lamp, his hat pulled low over his forehead, his dark overcoat collar turned up, and a beat-up leather trumpet case under his arm.  He shuffles slowly from another all-night gig, his lips swollen from hours of pressure from the trumpet mouthpiece. The last tune he played runs over and over in his mind.

That trumpet player jamming with his musical buddies at the turn of the century kicked off the colorful musical language that continues to evolve today.  Those were the days of King Oliver’s Creole Jazz band, Kid Ory, Louis Armstrong, , and many other New Orleans musical “saints.”  Generally the groups were made up of black musicians, but there were also white players like Bix Beiderbecke and the Wolverines in the '20s who spoke the same musical language.

I used trumpet players in this example because that is my instrument, but you can follow the same evolution on the keyboard with Fats Waller, Count Basie, Dave Brubeck and other great jazz piano players, numerous sax players, and many others.

There’s a part of me that would like to have been that lone figure in the film noir scene with a trumpet case under his arm, leaving an all-night jam session sharing Bourbon Street with those musical giants of the past.  The musicians who were at the bedside in New Orleans for the “Birth of the Blues” had no idea that they created America's only unique musical form.

Pride Goes Before the Fall

Arrogance is a trait that I have never understood.  What I mean is that I have difficulty understanding how someone can be arrogant and how they can justify their hubris intellectually in a large and realistic context.  Arrogance is the manifestation of pride. And pride is the problem.

We all deal with pride to one degree or another.  In my case, I have too many failures to let pride linger long enough to morph into arrogance.

Pride and arrogance are a lifestyle with some people, but only an occasional blip on the screen of life for others, like when you make the perfect omelet.

Look at our glorious and egocentric leader who only brushes up against humility briefly on the golf course when he misses a putt then blames Bush for moving the hole.

Given his history, Al Sharpton has little reason to be proud.  But I got a kick out of Al recently as he took the stage responding to the Ferguson riots.  He’s lost a ton of weight, which makes his head look disproportionately large.  I’ve done a lot of ocean fishing and Sharpton reminded me of a Cabazon, which is a bottom feeder named Cabazon for its huge head and small body.

Arrogant Al, after being anointed by the administration, strode slowly and majestically to the microphone. His back was straight as an arrow, his head up in perfect alignment with his spine. It looked a little overplayed, but I took this to be a cautionary measure to maintain his center of gravity.  If that head got a little off center, the man would immediately tip over and fall off the stage.

I worked my way through college at a variety of jobs, but I made pretty good money playing in small combos at fancy country clubs.  I’m going to describe an incident that is a graphic example of a fall from pride to humility.

I was playing a gig at the Palo Alto Hills Country Club when it happened. As I was playing, I spotted the most beautiful women in the room, which was a talent I had in those days.  She was elegant, gorgeous, and dripping with expensive jewelry.  She reeked of class and was well aware of her beauty.  I fell in love instantly and turned my trumpet into a love machine, projecting a sensual ballad in her direction.  A slow glance at me was all it took for me to forget what I was playing.

I watched her virtually glide across the large dance floor on her way to the ladies room and waited patiently for her return.  When she reentered her kingdom, all eyes seemed to be on her and she knew it.  This was her night.  She was the queen.  But then I saw it!  It was horrifying!  Ghastly.

There was at least ten feet of toilet paper stuck to the heel of her right shoe. As she walked, this obscene trail of toilet paper chased her in grotesque jerks, followed by a float, then another jerk, a float, a jerk, a float. What an incongruity.  I closed my eyes and continued playing, but I couldn’t look anymore.  My fantasy had exploded.

That was an example of pride going before the fall.  It was also a reminder to me that at base we are all just human beings crawling around like insects on a huge dirt clod flying through space.

We have no justification for considering ourselves better than anyone else.  Money, degrees, social status, athletic prowess, and whatever superficial robes of pride we wrap ourselves in mean very little.  We came from dust and we will return to dust. All skeletons look alike.   Life reminds us of this fact now and then.

The great thinker, C. S. Lewis emphasized the fact that pride is at the base of all sin. If you don’t like the word “sin” use your own equivalent, but think about it.  I’ve written that the basis of virtually every problem we have as a culture is moral ambiguity.  If you analyze it, pride is a major factor in that moral deficit.

So when you see a beautiful movie actress strutting in front of the cameras at the Oscars, just picture the camera zooming in on ten feet of toilet paper caught on her shoe. That will level the playing field.
Posted by Ralph Higgins at 10:31 AM 2 comments: