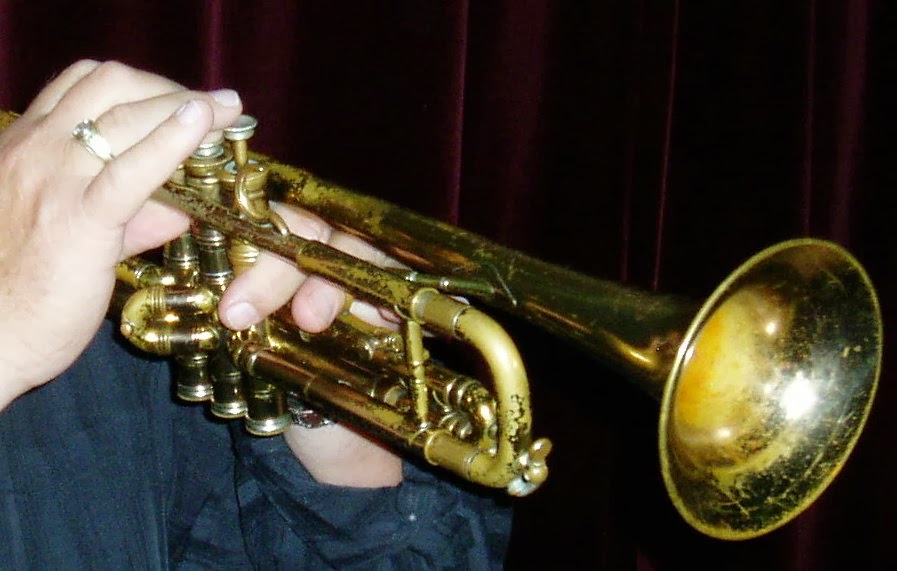 It’s just an old piece of twisted brass, with tubes going here and there, finally ending in a flourish called the bell.  It is designed to make music and it’s called a trumpet.  But this particular horn appears to have been through a war.  The battle scars and blemishes are obvious and a close look will reveal the wear made by the hands that held it through many years of work and play.

That old trumpet could tell a lot of stories.  Some of the early scratches may have resulted from being tossed on a sofa when the smell of spring grass and the crack of a bat hitting a ball were too much for a kid to stay in the house and practice his trumpet.

The old horn learned to adjust to the shaking hands of a terrified eight-year-old kid playing solos in a large church, a “required” task that he hated. And the same kid at thirteen playing in a local symphony orchestra for the first time . . . and actually being paid.

Then, a year later, nervously warming up backstage for the first concert with the San Jose Symphony Orchestra - back when the horn began to earn its keep.

Unfortunately symphony orchestras have gone the way of the Brontosaurus in a culture where untalented rock stars are paid millions to play three chords on a guitar, scream, jump around, foam at the mouth, and look stupid while classically trained musicians take day jobs to buy food.

The old horn could tell stories of a wide variety of venues and musical styles.  The horn found itself passing musical gas in big bands, recording studios, circus bands, pit orchestras, symphony orchestras, bugle calls in the military, country club combos, and just plain fun with rowdy audiences at places like Big Al’s Gashouse or the Red Garter in .

Country club combos and jazz groups became a staple and a welcome change from tuxedos and the formality of various classical venues.  And they paid more.

The old horn was good at paying college costs and opening doors to people and places otherwise inaccessible to the “non-elite.”  But soon the old horn learned to be content in its supporting role when teaching school, business, and real estate projects took precedence over music as the major source of income.

In recent years the old horn has retired, along with the kid who played its first note. Now it rests in its case until called upon to say a few musical words now and then.


When it hears the click of its case being opened, it’s usually for another jam session and some fun.  Although its recreation now is limited, the old horn knows that when music is in the soul, to not play music is like holding ones breath.

Labels: when I was a kid